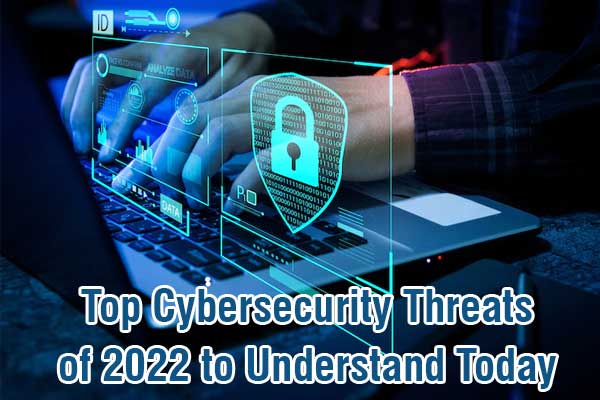 Cybersecurity might have taken a back seat for some people and organizations over the last few years due to the global pandemic and so many other topics being top of mind, but that doesn’t mean hacker threats have gone away. In fact, many would say that they continue to multiply and become more sophisticated.

Either way, we all need to be vigilant and take steps to protect our data and that of our children, customers, investors, and more. To do this, it’s helpful to keep a close watch on some of the top cybersecurity threats every year.

Phishing attacks have been around for a while now but are certainly getting increasingly sophisticated. This technique involves hackers sending carefully targeted digital communications, often emails, to trick people into clicking on a link that will install malware or expose personal information, or fooling people into opening an attachment that may do the same.

With many of us becoming more mindful of phishing, though, and aware of the dangers of clicking on suspicious-looking links or responding to messages that seem not quite right, cybercriminals have had to lift their game. Today, they regularly use machine learning tools to create and send convincing messages more quickly and effectively. Increasingly, hackers are able to steal credit card credentials, user logins, and other personal and business information, including databases.

It’s vital to remind employees and ourselves of these dangers and remember to type in URL addresses for sites that require logins rather than following links from messages (which could potentially be fake). Don’t open attachments if you’re unsure of the sender. Pay attention to things like the addresses emails get sent from, the logos and taglines used in messages, the style and tone of language used, and what the communications suggest recipients do.

Noticing things that don’t look right or requests that the genuine companies mentioned would never ask for can help us all stay safer. For example, banks don’t ask customers to click a link and fill in identifiable information, so any email purporting to come from your bank that asks for such details is likely to be fraudulent.

Ransomware – where hackers break into devices or networks and lock owners out until they pay a ransom – has also been around for a few years now and continues to grow in scale and sophistication. In 2022, many victims have been stung by ransomware in an evolved, more complex attack than those often used in the past.

Ransomware is often the final step in a well-thought-out cyber attack process that, initially, involves phishing, social engineering, or a web application attack for hackers to get a foothold in a person’s or organization’s network. Ransomware is likely to continue to grow, too, because of the rise of cryptocurrencies. Services such as Bitcoin enable cybercriminals to get their ransom demands paid anonymously.

While companies and government departments have been some of the primary victims of ransomware attacks over the years, this may start to change a bit as these organizations teach their teams to create and build more robust defenses against ransomware. This year and beyond, we’ll likely see hackers target more profitable victims with ransomware, such as high-net-worth individuals.

To try and avoid getting stung by a ransomware attack, we must utilize quality, comprehensive security software, such as that sold by Trend Micro, that protects against ransomware, among other things. Firewalls are beneficial, too. Most computers have firewalls pre-installed on them these days, although you may need to switch this tool on for it to work – go to the settings section of your device to do this.

We all use credentials such as account names and passwords to log in to various apps, accounts, and more online. Unfortunately, hackers regularly use these habits against us through a “credential hacking” strategy. This technique involves cybercriminals stealing someone’s credentials from one organization and then using these to access the person’s user accounts elsewhere.

For example, a hacker might breach a popular eCommerce site, steal a bunch of details from its customer databases, and then use this login information to try to log in elsewhere, such as a bank, another store, social media site, streaming service, Google, Microsoft, etc.

Other times, attackers simply purchase people’s credentials from someone selling them on the dark web and then use the credentials from there. Either way, credential stuffing means that victims have their accounts logged into by hackers using their stolen usernames and passwords. The fraudsters use automated bots to attempt to log in to various services and sites. Once a credential set that works has been identified, they can log in themselves while leaving little to no trace of their actions.

Since this strategy is easy for hackers to use, this type of attack is more and more common these days and is only likely to increase further. As such, we all need to be wary of using the same passwords across many different sites. Reusing codes on multiple accounts makes it much more likely that a credential-stuffing attack will occur.

Social engineering is a phrase that refers to cyber attacks that occur due to the compromise of a person rather than the breach of a system. In these situations, individuals get manipulated to unknowingly release confidential information to hackers. Cybercriminals use numerous ways to make this happen, but one of the most common is email phishing.

The fraudsters trick people into downloading malware that infects their systems and gives hackers a way in. They trick them into giving up their credentials because they think they’re dealing with a reputable, genuine person or organization. Unfortunately, many people never even realize they’ve been hooked and conned.

Social engineering tends to be the first step in a multistep cyberattack and exploits the weakness that any business or government department, etc., have: human psychology. Hackers find ways to use human flaws to get what they want. Social engineering often involves the use of phone calls and social media and many other variations. It’s hard to prepare for it, as a result, but paying attention to red flags that arise in digital interactions and understanding the types of scams cybercriminals use when phishing and creating other manipulations definitely helps reduce the likelihood of being tricked.

If you haven’t heard of cryptojacking, it’s probably only a matter of time. Cryptojacking is a hacking strategy where cybercriminals hijack third-party computers (both work and home-based ones) to try and “mine” for cryptocurrency such as Bitcoin. Hackers utilize other people’s devices in this way because mining for cryptocurrency requires a considerable amount of computer processing power. By piggybacking on other systems, hackers can make their money faster and cheaper.

Unfortunately for the people whose computers they use, this cryptojacking leads to the piggybacked systems slowing down and suffering from other performance issues. Often, IT techs must track down and resolve the issues caused by the cryptojacking hackers. If you notice your computer(s) playing up, it’s worthwhile checking into whether your devices have been compromised without your knowledge.

Other top cybersecurity threats of 2022 to consider are:

These are just some of the most common hacker strategies these days, but they are some of the biggest ones. Take steps to secure your data today to avoid dealing with the fallout of becoming a victim of an attack.