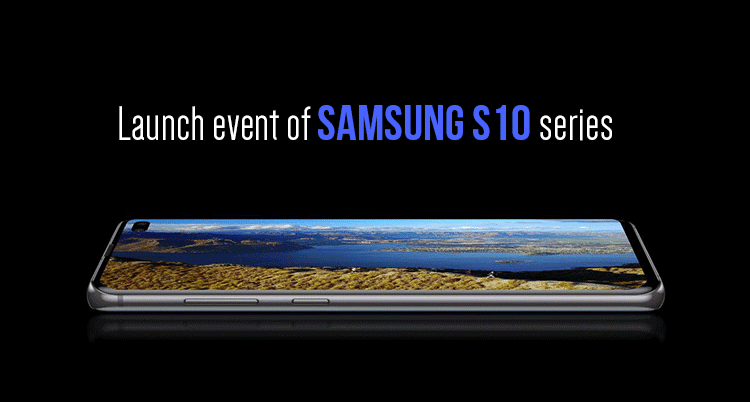 Samsung, the world-renowned brand has finally launched something new in the market. The S series which is known to be the best lineup of Samsung is now is in the 10th version from its beginning of manufacture on 4th June 2010. On this occasion, the company launched three new smartphones namely S10 e, S10, and S10 Plus in San Francisco on February 20th.

Three of these phones are equipped with the latest punch hole styled display and obviously the best screen in the market which is the very own AMOLED display of Samsung. The best part of these phones is its infinite displays with the whole body to screen ratio and of course the front-facing cameras within the body as a punch hole.

The new stuff which has amazed everyone in these days is inbuilt fingerprint scanner and Samsung has its own advanced security system in it using the ultrasonic waves to detect the blood flow of the fingers to be put on it. This provides high-end security to the phones unlike optical-based fingerprint scanners in one plus 6t and vivo phones. They can be surely used for the purpose of the payment as they are highly secure.

S10 and s10 plus are proper flagships with sophisticated designs triple cameras on the back and a dual camera setup with a secondary 8-megapixel camera in the punch hole. Triple rear cameras with one 16-MP and two 12-MP resolutions where the second one is a dual pixel wide having f1.5 and f2.4 and the third camera being the telephoto sensor. front-facing cameras with 10-MP dual pixel with focal aperture of 1.9 and 8-MP depth-sensing camera with focal aperture 2.3 in the punch whole with infinity Oled display screens.

They have the 6.1 and 6.4-inch displays respectively with all high-end specifications and every required sensor. One of the best and appreciable things about these phones is the 3.5mm audio jack that almost all companies are dropping starting with the expensive iPhones to Google pixel and now even the so known as flagship killer one plus 6T too.

S10 e is more of a new galaxy lineup which is meant for the mid-range users and is available at the price of $750. It has a single front-facing the camera, a 5.8” display and a 3100 mAh battery which is relatively the lower end of the other two phones. However, this wouldn’t be a problem at all as Samsung’s One UI is known to have one of the best ever battery optimization feature in it.

📲 New phones which are announced by Samsung

After all three phones are launched; Samsung also announced a surprise for the Samsung lovers. A foldable Smartphone with some advanced features like screen continuation and the first ever 5G supported phones in the same S line up. Although there are rumors about the foldable smartphones being unpractical and still in the beginning stage, Samsung claims to have done the best work in manufacturing them.

Some incredible features like 7.3” display supporting screen continuation when unfolded and the same Infinity display make it really advanced one after flex pie. They also support three multi tasking windows when unfolded which is claimed as the futuristic model which was never seen before.

These phones are about to be launched on April 26th and the users who admit to buying them will be the beta testers for it. Foldable Smartphone of Samsung is also known to be the most expensive smartphones ever. The buyers who are going to buy them soon after release will be the testers for the foldable Smartphones and according to the reviews, development will be done. However, this looks quite exciting.

Besides all these announcements in the launch event including foldable, wireless earbuds, and the S10 lineup, S10 5G has gained utmost attention by everyone. 5G is the next generation network that is yet to be launched in many countries.  Many renowned companies like Vivo, Oppo, LG, Huawei, and Honor has already claimed that they are going to launch the phones supporting the 5G network. Many internet service providers have also claimed to bring in the 5G network before their competitors attempt for it such as Airtel and idea.

Samsung has not announced the date of launch of these 5G supported phones yet. Even if they attempt to release these smartphones in the market, there are no service providers which are providing this futuristic network. For now, it is just known as the fastest ever network that is never witnessed to date. Thus if this 5g phone gets released there will be no 5g supporting network and the feature will be kept on hold for upcoming years.

📲 Carrier partners who are likely to support Samsung

Some renowned carrier partners of Samsung such as Verizon are sure about releasing 5G network soon and thus the use of this feature will be utilized by the users hopefully. As per now, there are no 5G networks in the United States which make this announcement futile. Apart from the speed, this is known to be the ultra futuristic Smartphone in the market with all high-end specifications such as the S10 plus.

📲 Announcement of Verizon regarding 5G network

Verizon is the first company to announce the preliminary 5G network which is meant to replace the wired landline internet connection. However, this network is not compatible with mobile devices and is limited to the home network of the United States. Until later 2019, the company is going to bring out the network which will work with any mobiles after the standard equipment is ready in this year. Besides that, Verizon Company has not announced anything regarding the standard 5G networks which mean the official announcement is still to come.

In the launch event at Bill Graham Civic Auditorium at San Francisco, Samsung has officially announced that the 5G version will be launched in first half of 2019.  This announcement didn’t seem to work because Verizon has announced recently that the 5G network will come to use in nearly 30 cities by the end of the year 2019. CEO of Samsung, Hans Vestberg also said in his speech that “S10 5G is not too far away”. However, there are not a lot of places which are going to have the fastest 5G networks this year. Even the best-selling markets of Samsung, India is also not going to get the futuristic network soon which means although the phone will be released it is not likely to be in use.

There are a few persons who like to have a futuristic Smartphone that is premium in its time, but apart from this S10 plus is a better deal till date.  The users for this 5G phone will increase only when the answer to the question “How millimeter technology will work?” will be answered by the manufacturers. This was the biggest unanswered question of 2018 when talks about 5G phones were new to the Smartphone market which remained unanswered until now.

Many questions regarding 5G were in the air until the end of last year but were technically solved to an extent with the company AT&T that launched the Wi-Fi having 5G network capabilities. The WI-FI network is in the proper testing state in some places but is not having the standard capabilities of the faster network. On the other hand companies like T-Mobile and Sprint have also talked a lot about their upcoming plans for the 5G network and the supporting devices. Neither of them has announced any official updates about these plans or the launching date in many countries.

📲 Rumors about the announcement of Samsung 5G

📲 The benefit to Samsung from this announcement

📲 Problems which are likely to be faced by all 5G Smartphones

This attempt by Samsung announcing the 5g supporting device is surely good for the technology development as all other companies will start their groundwork for this attempt for sure. Bringing in the fastest 5G network can increase the efficiency of the internet in almost all aspects and Samsung will remain as the first-ever smartphone to feature 5G support.