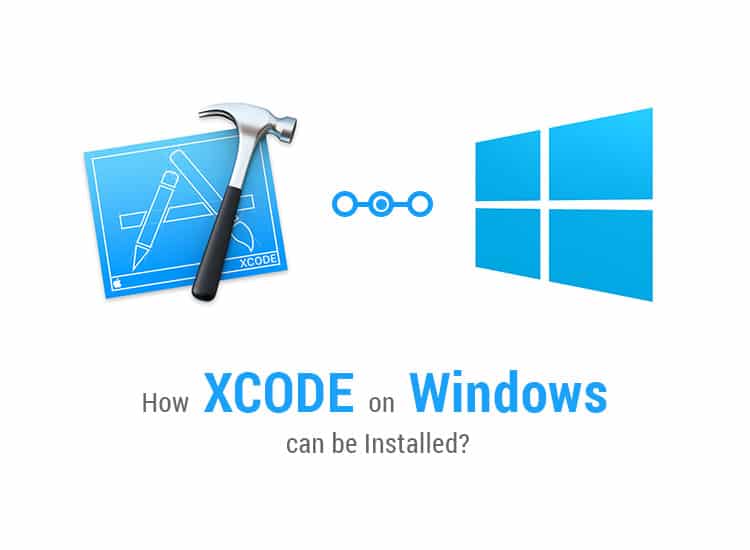 Now a days every operating systems have got their own apps. Like we can use windows app on linux and vice versa. But Mac is the only OS in which we can’t use apps of other Operating Systems. Mac uses Xcode to develop apps in itself. Xcode is available for only MAc and iOS platforms and not for any other OS. The reason for this unavailability is compatibility issues in OS like windows and Linux.

But everything is possible when it comes to technology. So, we will be discussing about how to install XCode on Windows.

Xcode is an IDE also Integrated Development Environment that contains a set of software development tools, that are designed by Apple. These tools are available specifically for software on Mac OS X, iOS, and Apple TV. And this IDE is programmed in a way that you are not able to install it on any other OSs. Xcode is solely available for mac OS.

Many Developers don’t have problem for developing an application for Linux and Windows OS as compared to Mac OS. The reason being applications for android and other platforms can easily build on any platform while developing apps on MAc requires a toolset called XCode. Although there are various app development software  like Xamarin which provides a platform for making and testing apps of Mac, iOS, Android , Windows OS. It is  still different from native Mac and iOS apps development on Apple’s own operating system. If you want you app to be really good, you should use Xcode on real Apple Hardware or Apple device. It will help you to give most user prospective errors and problems. Here is the detailed solution to install Xcode in Os like Windows.

Various Steps to install Xcode on Windows 10,8/8.1 and 7 Desktop or Laptop Here we are using Virtualbox to install Xcode on Windows. So if you haven’t install virtualbox in your desktop or laptop you can download it as it is free and open source.

Follow the below steps so as to install Xcode on Windows 10, 8 or 8.1 and other versions for iOS SDK

Step 1: Download and install Vmware or Virtual Box on your system and you can search for “Virtual Box 5.2.4 platforms packages” and click on “Windows hosts” in the website.

Step 2: Now , you should download and install OSX Mavericks ISO as a virtual machine.

Step 3: You then create the virtual machine on your Oracle virtual box. For this you need to open Virtual Box and click New

Step 4: Now, you will get a new windows which will ask you to name the new operating system. Enter Name as OSX, type as Mac OS X and also enter the Version as Mac OS X (32 bit). Click Next

Step 5: Select the memory size for the virtual machine as 1024 MB that is 1 GB and then click Next.

Step 7: Select the type of the hardware file as VDI that is VirtualBox Disk Image). It is always recommended to go for VDI when you have ISO image. Click Next.

Step 8: You should select the hard drive as dynamically allocated. Now there is  need to allocate the file location and size from the physical hard drive on your device. Then click on Create.

Step 9: Now since you have successfully installed and created a virtual machine on your virtual box. It will be in “Powered Off” state.

Step 10: Now you need to mount the OS X Mavericks ISO that we have downloaded before. For that , Go to the Settings -> Storage -> Load iso File -> Click Ok -> Start

Step 11: Next, Follow the steps showing in the screen of OSX boot and then OSX will be installed in Oracle Virtual.

Step 13: Open the official Apple App store and sign in or sign up using your Apple ID in the App store. Then there is need to enter the Apple ID and password.

Step 14: After you sign in , type Xcode in the search box.  It can be select any of the apps. Click on Free and Download. Then, click OK to download the kit. After completing the installation process, open it from the applications section.

Step 15: if you want  to install Xcode components, you need to be the root user. So now, you need to provide your root credentials. Enter your name and password and click OK

This is it, we have now successfully installed the latest Version of XCode on your OS ie Windows using Desktop virtualization Software VMWare Workstation. Make some new projects and better applications using this interface

So in this way, you can easily download and install XCode for windows Desktop or laptops. The performance of the XCode won’t be good or extreme high. Hope this helped you in the best way to install Xcode on Windows 10, 8/8.1 and 7 Operating System running on Personal computers, Desktops or laptops.

Another alternative way is to rent a Mac OS machine on cloud since there is no legal way to install Mac OS in windows operating system. It is much cheaper than buying mac and you have all the possibilities.

Scroll back to top